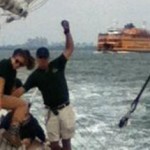 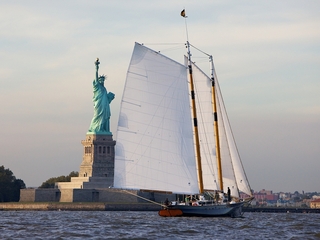 Comments Off on Chelsea Yacht Vies for Prize at This Weekend’s Races Updated October 5, 2011 1:15pm 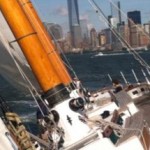 Classic yacht race:
Under the brilliant sun of Columbus Day weekend, seven classic vessels plied New York harbor in a dazzling display of tall masts and sails. On each of the three days, they were to have raced each other up and down the harbor, but said Michael Fortenbaugh, commodore of the North Cove Marina, “The high pressure system that brought the sunshine and warm temperatures also meant light winds. There was also strong current because of the approaching full moon.”

The course for Saturday’s race from North Cove to the Verrazano Narrows bridge “was altered to be a one-way race that finished at the bridge,” said Fortenbaugh. “America II crossed the finish line first but Black Watch won on corrected time. What that means is that each boat has a rating that reflects its theoretical speed. After the finish times are recorded, they are adjusted based on the rating to see which boat actually performed best in that race.”

On Sunday, the boats were supposed to race to the Statue of Liberty. The race started but light winds caused the race to be abandoned after two hours. On Monday, the boats were slated to race around Governors Island and back, but because of the light winds and strong currents, the course was again changed to a one-way race. “Salty won this race on corrected time, beating America II by two seconds,” said Fortenbaugh.

If the guests aboard the vessels minded that the racing didn’t materialize as planned, no one seemed to mind too much. The weather was gorgeous. The harbor looked beautiful. Aboard Classic Harbor Line’s new schooner, America 2.0, which was launched just three weeks ago, champagne and beer were poured and the crew brought out box lunches.

The Pride of Baltimore II, a reproduction of an 1812-era topsail schooner privateer,  preened and posed as she scooted around the harbor. Commissioned by the city of Baltimore as a goodwill ambassador, she evokes the days of the famed early 19th-century Baltimore clippers, whose speed helped to win the war of 1812 against the British.

“This regatta will be held at North Cove again next year over Columbus Day weekend,” said Fortenbaugh.  “The public can participate by buying a ticket to race on one of the boats. This year, America II offered six tickets at $390 per race and sold out. The Pride of Baltimore II offered 35 tickets at $90 for each race and sold out as well.”  Tickets for America 2.0, whose design is based on a vessel called “America” that was built in 1851 and won the first America’s Cup, were $125. The Columbus Day regatta marked her last appearance in New York harbor until May. She will be sailing in Key West for the winter.

Battery Park City in bloom:
The ruby-throated hummingbirds (Archilochus colubris) that are currently stopping in Wagner Park on their way to Mexico and Central America for the winter find welcome sustenance in the “firecracker” plant, so-called because of its long, red blooms, well suited to a hummingbird’s slender bill and taste for nectar. Cuphea “David Verity” was hybridized by botanists at the University of California (U.C.L.A.) from two species of cuphea native to the parts of the world for which the hummingbirds are bound. Unlike Battery Park City’s specimens, few members of the genus “cuphea,” which has 260 species, are used for ornamental purposes. Most are raised for their seeds, which can be turned into oil.

Hummingbirds have good color vision and prefer red or orange flowers. They can see parts of the ultra-violet spectrum that are invisible to humans.

The hummingbirds now in Wagner Park are all female. The males migrate south several weeks before the females, and return earlier in the spring. These remarkable birds that are around three-and-a-half inches long and weigh one-eighth of an ounce are fueling up to fly thousands of miles, including a non-stop journey of around 500 miles over the Gulf of Mexico that will take them 18 to 20 hours.

Pier A update:
At the meeting of Community Board 1’s Battery Park City Committee on Oct. 4, Anne Fenton, assistant to Gayle Horwitz, president of the Battery Park City Authority, had some news about Pier A. “We’re still working on the core and shell,” she said, but added that the restoration was taking somewhat longer than planned because of “the delicate nature of working with a historic building on the water.”

Pier A, which was completed in 1886 for New York City’s Department of Docks & Ferries, is the last surviving 19th-century pier on the Hudson River in Manhattan. It is expected to reopen in 2013 with restaurants and a visitor’s center. “That plan has not changed,” Fenton said.