This month, 24,000 architects from across the county will gather in New York City for the annual conference of the American Institute of Architects (AIA). In honor of the event, our AIA Around Manhattan architecture tours will highlight some local recipients of the AIA’s Gold Medal, considered one of the most prestigious awards in the architecture world.

Since 1907, only 15 New York-based architects have received this award. This year, James Stewart Polshek, founder of the New York firm now known as Ennead, is the 2018 Gold Medalist. Ennead’s Standard Hotel project from 2009 is a star of our architecture tours—it’s the only newly constructed building allowed to straddle over the top of the High Line.

Altogether, 20 projects can be seen by AIA Gold Medalists on our tour including Steven Holl FAIA, Lous I. Kahn FAIA, and Cesar Pelli FAIA. 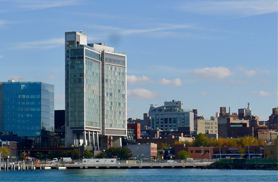 Long Island City
Steven Holl FAIA, Architect
2018
Located on a prominent site along the East River against the backdrop of recently built skyscraper condominiums, this 22,000 square foot library brings community-devoted space to the increasingly privatized Long Island City waterfront. The concrete structure of the building is exposed and aluminum painted, giving the exterior a subtle sparkle. 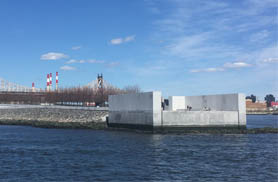 Roosevelt Island
Louis I. Kahn FAIA, Architect
2012
Located on the southern tip of Roosevelt Island in New York City, the FDR Four Freedoms Park is the last work of the late Louis I. Kahn, an iconic architect of the 20th century. Executed by Mitchell/Giurgola Architects, the Park celebrates the Four Freedoms, as pronounced in President Roosevelt’s famous January 6, 1941 State of the Union speech. 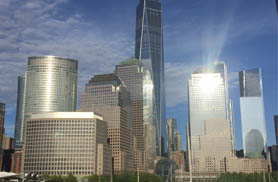 Battery Park City
Cesar Pelli FAIA, Architect
1985
Brookfield Place is a familiar presence on the New York City skyline, the four stepped towers forming the western wall of Lower Manhattan. While the architecture is unmistakably modern in detail and construction, the buildings reference architectural history, expanding the possibilities for skyscraper design and expressing the aspirations of the contemporary city.

Posted in News & Events, Press Releases | Comments Off on AIA Gold Medalists on Around Manhattan Tours