America 2.0 to sail to Charleston, SC

America 2.0 to sail to Charleston, SC

Classic Harbor Line’s fastest and largest schooner, America 2.0, will be wrapping up the season in Key West, FL., on May 15 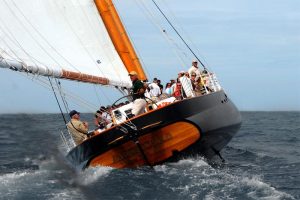 before sailing to Charleston, SC., for the Maritime Tall Ships Festival. Events begin on May 19 through May 21, 2017, and will bring together nine international tall ships offering sailing excursions and boat tours throughout the festival.

During the 3-day Festival, Schooner America 2.0 will partake in the highly anticipated Parade of Sail with three other sailboats. Bring your camera! The boats will sail by the Historic Charleston Waterfront and up to Riverfront Park for a cannon salute, giving spectators a chance to see each boat up-close and under sail. Looking for a more unique experience? Participate in the Parade of Sail by hopping aboard America 2.0! Tickets are available for purchase here.

Built in Albany, NY, by Scarano Boat Builders, John and Rick Scarano, America 2.0 joined Classic Harbor Line’s fleet in 2011. She spends half the year in New York City offering public Day Sails to the Statue of Liberty, Sunset Sails and City Lights Sails, along with private boat charters, and the rest of the year in Key West, FL operating beautiful Key West sunset sails. America 2.0 is a tribute to Schooner America that won the first America’s Cup in 1851. Built with cutting edge technology, the materials used to build America 2.0, along with her electric propulsion system, make her an eco-friendly sailing vessel.

Following the Maritime Tall Ships Festival, America 2.0 will continue sailing to New York City. Her first sail of the season in New York Harbor will be on Saturday, May 27.

Learn more about this festival by visiting the site: www.tallshipscharleston.com

A Note about the Author:

Meg Yeiter: Meg grew up and went to college in Michigan. After graduation, she did what any 21-year-old with a degree and no 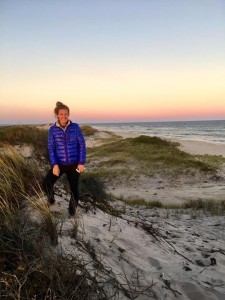 job would do – move to a mountain town to spend all day skiing fresh powder and afternoons clinking glasses at chic après ski lodges. Just kidding, she moved to Park City, Utah, where she got her first journalism job as a reporter at the local newspaper and borrowed her friends ski’s to hit the slopes a few times a month. Meg has always had a passion for traveling and the outdoors. She moved to New York City in early 2015. During her first year here, Meg found herself consistently running to Classic Harbor Line to catch an evening sunset sail. She officially joined the Classic Harbor Line team in April 2016 and now no longer needs to run anywhere. In her free time, Meg enjoys exploring New England, repurposing furniture, and sailing of course.

Posted in News & Events, Press, Press Releases | Comments Off on America 2.0 to sail to Charleston, SC