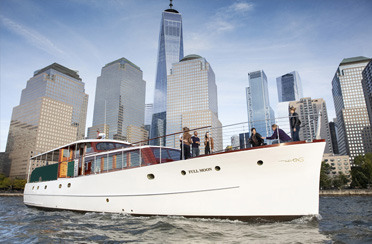 The Yacht Full Moon operates right out of North Cove Marina, which is just steps away from the inspirational Freedom Tower and the heart-moving 9/11 Memorial. After a day of sightseeing, walk on over and cruise with us to see this amazing city from the water’s perspective. Cruise out into NY Harbor aboard our classic Full Moon yacht and relax with friends or family to view the amazing NYC skyline and get up close and personal with the Statue of Liberty.

What is a Grebe Yacht? Henry C. Grebe & Company was the successor to Great Lakes Boat Building, which started in Milwaukee in 1915 and moved to Chicago in 1921, located on the west side of the North Branch of the Chicago River, just north of the West Belmont Avenue Bridge.

Grebe leisure yachts were famous for their style and quality. They built their last boat in 1970 but did not finally close until 1994. The Grebe yacht acquired by Classic Harbor Line, Full Moon, was a 65-foot production in 1950. Another 65-foot production they completed a decade later, Florencia, and later renamed Sam’s Place, was obtained by the famous actor and comedian, Jerry Lewis. Jerry used the boat for leisure and relaxing with family in the San Diego area. This photo of Sam’s Place is comparable to the spirit and look of Full Moon once she is fully restored.

Step aboard one of the smaller more intimate wooden yachts of the Classic Harbor Line fleet and depart from North Cove Marina for a cruise in New York Harbor at Sunset. This yacht has comfortable seating and excellent views of the city skyline and New York harbor. Each excursion will feature a slow pass by the Statue of Liberty & Ellis Island. On occasion, at high tide, we may even circumnavigate the Liberty Island.

Join us for some afternoon sightseeing aboard our Statue and Skyline cruise departing from North Cove Marina on one of our classic yachts.  In the heart of Battery Park City this is the perfect place to jump on a boat and head out into the Harbor to see the city from the waters perspective.  View iconic sites such as the Statue of Liberty, One World Observatory, Ellis Island, Governors Island, and more!