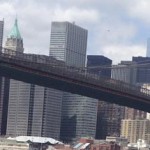 ‘Archtober’ (through Oct. 31) This monthlong celebration of architecture and design continues with lectures, tours and other events at locations around the city. Presented by the American Institute of Architects New York and the Center for Architecture — with the participation of 50 organizations — the series includes boat tours around Manhattan, an urban film series at the Guggenheim Museum and walking tours. A schedule is at archtober.org. Brochures are also available at the Center for Architecture, 536 La Guardia Place, Greenwich Village, (212) 358-6121. 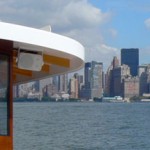 Architecture equals history, Kyle Johnson told passengers on the 80-foot yacht the Manhattan as it chuffed past the curtain of skyscrapers filling our view. “Buildings are made to endure.”

During the nearly three-hour AIANY Around Manhattan Architecture Tour, Johnson explained the skyline through its buildings (and at times the lack of them) and the textures, colors and shapes that are the key to the island’s various eras of design.

“This tour gives you an overview of the entire city, which you can’t possibly do in two hours on foot,” said Johnson, an architect. “You can see the entirety of buildings.”

The tour, structured by the New York chapter of the American Institute of Architects, sails up the Hudson River (which Johnson is quick to point out is not a river, but a tidal estuary) before turning right at the northern tip of Manhattan. The guide lists 156 points of architectural interest, although at some point, I start classifying some structures as either “Neat” or “Who thought that was a good idea?”

The voyage south on the Harlem and East rivers passes under 19 to 20 bridges that provide access to Manhattan’s east side, including a few inventive swing and vertical lift bridges designed to allow passage for tall ships.

The route is similar to any number of circle-island boat tours, but with fewer passengers than most (plus snacks and Champagne) and with a more informed voice about a rapidly changing aspect of the city.

“Typically the city has turned its back to the waterfront because it was a working waterfront,” Johnson said. “The city now is engaging the waterfront; it’s now a place you go to recreate, to enjoy the views.”

Even within the past five years, dozens of new waterfront parks and projects appeared in areas that had been dilapidated industrial zones and rotting piers.

“You’re a lot more aware of the river,” Johnson said, “and you’re not only able to get a look at it, but use it and travel on it.” 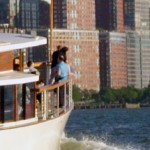 We want you to get out to eat this summer — literally — so we’re featuring the best spots to soak up the sun or the stars with food, drinks and friends wherever you’re traveling. This week’s great places in the great outdoors: waterfront dining destinations! From a chic, airy oceanfront patio in Malibu to a cruise alongside Washington, D.C. on the Potomac, here are the hot spots for summer suppers on the water, or nearby but dry.

A 1920s-style “commuter” yacht, the Yacht Manhattan is the most luxurious of the Classic Harbor Line’s cruises in the waters of New York City. The 80-foot yacht carries guests around the island, with views of most of the major sites of the Upper New York Harbor. All of the cruises feature complimentary food and beverages served in the solarium. The Yacht Manhattan also offers many special event cruises featuring food and wine, such as the Mother’s Day Brunch or the Wine Tasting series. 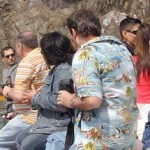 As we sailed north, along Manhattan’s iconic skyline, the tall, taller and tallest of its architecture, soon blurred into a forested landscape and rocky terrain, reminiscent of the Manhattan that Henry Hudson discovered four hundred years ago. The transition was quite evident as the Untapped Cities crew took to the waters aboard the classic harbor line yacht Manhattan inspired by the famous (and infamous) commuter yachts of the roaring twenties. The three hour spectacle- called the Around Manhattan Architectural tour sponsored by the New York chapter of American Institute of Architects, offers some stunning insights into the past, present and future of the ever evolving city and its waterfront.

Our cruise set sail from Chelsea Piers, which in itself represents the dramatic story of New York’s waterfront. A marvel of its time, Chelsea Piers housed the grandest of ships from around the world, served as a takeoff point for soldiers departing for battle, and then as a cargo terminal. Gradually, like much of the waterfront, it became a neglected Manhattan relic until the 1990s, when it began its climb back to importance as a major recreational hot spot on the Hudson.

The juxtaposition of architectural styles was distinctly evident as we launched into the 32-mile voyage along New York’s sixth borough, intercepting more than 150 architectural icons that stand out in the dense urban forest. Our tour narrator, Scott Cook, cruised through different eras of architecture that characterize the story of New York– from remnants of a glorious industrial past, to the glamorous “starchitecture” sprinkled among large swaths of the “anonymous” architecture that populate the city.

Sailing along the ‘BIG U,’ a multitude of glassy, reflective buildings punctuate the skyline towering above the Gothic skyscrapers that once raced for supremacy in the heaven-climbing contest. Our eyes wandered from the pyramidal roof of 40 Wall Street aka the “Crown jewel of Wall Street” to the Gothic spire of 70 Pine street and the gorgeously ornamented, Neo Gothic Architecture of the Woolworth building. At times, bulky rectanguloids disrupted this magisterial skyline, but it’s the new World Trade Center complex that dominates the skyline. Towering up to 1776 ft, One WTC and its modest counterpart, Four WTC, reflect some dramatic views of lower Manhattan and the clouds they cut through.

Across the waters, in stark contrast to the wall of skyscrapers, Ellis Island lays in tranquility. Designed in the French Renaissance style, the red brick immigration center was once the official gateway to America for 17 million immigrants, many of whom probably contributed to the vertical expansion of the city.

Passing under the triumvirate of Brooklyn, Manhattan and the Williamsburg Bridges, there was a sudden burst of overwhelming excitement with the cliffs and canyons of lower Manhattan on one side and rustic brick facades and smoke stacks on the other, like the Domino Sugar Refinery. Once a symbol of the booming manufacturing hub, most of these industrial relics will soon be re-fabricated to suit the needs of the 21st century economy.

Heading up North, the skyline plunges into a sprawling wall of red bricks as the superblocks take over the waterfront–one of the many permanent marks left on Manhattan’s face by Robert Moses. But not for too long, as the elegant spires of the Chrysler, Empire State Building and the chamfered Citicorp Building stretch high up in the sky forming the crown jewels of the world’s most iconic skyline. Our cruise map once again got inundated with points of interest as we whisked passed the United Nations building, built on land that was once slaughter houses (and donated to the UN by the Rockefellers.).

On the opposite banks, the East River caressed the foundations of Four Freedoms Park, adorning the southern tip of Roosevelt Island. Decrepit ruins of the 19th century small pox hospital (the only ruins in NYC with Landmark status) formed a picturesque backdrop to the monumental granite blocks.

Continuing north through the narrow tidal straight of the Harlem River, lush green swaths of woodlands soon take over the steep topography of northern Manhattan. From Highbridge Park and Harlem River Park to the New York Restoration Project’s celebrated Swindler’s Cove, this portion of the tour gave us glimpses of the undulating terrain and dramatic natural landscape that once blanketed Manhattan.

Oh, and did you know there are 21 bridges connecting Manhattan to adjacent islands and mainland America? We cruised under all of these historic engineering marvels, many of them spanning across the Harlem River. At the northernmost tip, one of them also swings open and the narrow strip of water swells into the mighty Hudson, as the cliffs of the Palisades stand fixed in time and stark contrast to the iconic architectural landscape of Manhattan.

Passing under the grand George Washington Bridge and the Little Red Lighthouse at its feet, the banks of Hudson River get speckled with gems such as Riverside Church, modeled after the 13th-century Gothic cathedral in Chartres, France to Grant’s Tomb and the Cloisters.

On the upper west side, the iconic New York water tanks give a distinct identity to an otherwise flat skyline but within a matter of few blocks the starchitecture rises up through the city, painting castles in sky. The final sight on the cruise, a new residential tower, 200 Eleventh Avenue, takes luxury to an altogether new level, as an 8000 pound freight elevator whisks ‘your’ luxurious cars right into the apartment. They call it the sky garage! Down below, some 50,000 New Yorkers spend the night in homeless shelters.

New York is an urban mosaic in the making, and the multiple layers that built the city can so easily be overlooked while exploring it on solid ground, but aboard the Manhattan, layer after layer of New York’s story is revealed through architecture. Summer, of course, is a great reason to get off the grid and take on the currents. The ArchTour is a great way way to experience New York’s celebrated waterways, with some hors d’oeuvres, a glass of Champagne and the cool wind in your hair.