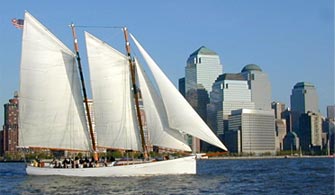 This elegant, white-hulled, 80-foot, 1890s-style pilot schooner is a gem in New York Harbor. Schooner Adirondack has been sailing these waters since 1999.  She features seating for up to 49, teak decks and impressive mahogany trim.  An open salon below deck features a marine restroom, bar services, storage and functions as a space to escape the elements.

Schooner Adirondack has been the fastest resident sail vessel in the New York Harbor for the past decade. She held the record finish in the Chesapeake Bay Schooner Race for 12 consecutive years and continues to demonstrate speed and a thrilling ride for her guests in New York Harbor.

The Schooner Adirondack runs an 8-month season in NYC starting in April and ending in November.

Posted in | Comments Off on The Schooner Adirondack

“Better than any picture or review could ever portray. The crew aboard the deck were very sweet and accommodating! Bring your own picnic but no alcohol! (They serve one complimentary drink and additional are available for purchase) You see every landmark listed in the description and what I loved is they gave you ample time to let the view sink in and take pictures. The price is beyond reasonable for the experience. Knowing what I know now I would have gladly paid double! This was a Birthday gift to my boyfriend and honestly we were both shocked at how incredible the boat ride was. We both could not stop whispering to each other how amazing the views were. He told me this was his best birthday ever and I have to thank Schooner for that! PS. I will be coming back with friends and family next time!”
~ Sunset Sail Customer

“A romantic, affordable night away from the busy city. I had a fantastic time on the Adirondack! On a boat that cuts the motor about halfway into the trip, it is a quiet, serene getaway from being in the city. I took my boyfriend, visiting from Scotland, and he didn't know something like this existed in such a “busy” city. I would highly recommend it in the warmer weather, especially for small groups and couples.”
~ Romantic Cruise Customer