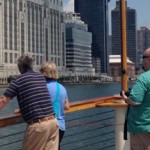 CHELSEA — New York’s waterfront is under pressure — and a local cruise company wants you to see it firsthand.

Classic Harbor Line has once again teamed up with the American Institute of Architects for their Around Manhattan Boat tours, which highlight the island’s unique architecture.

But after the devastation of Hurricane Sandy, the tour will focus on more than just beautiful buildings by looking at the competing demands on the city’s waterfront only months after much of it flooded during the superstorm.

“Pressure Along The Edge: The Future of NYC’s Waterfront,” is a nautical speaker series featuring experts on the city’s coastlines, charting the impact of rising sea levels on real estate, infrastructure, and business along the water post-Sandy.

“It’s always been one of the major themes of our tour — how City Planning is attempting to address rising sea levels, how to allow development but mitigate against storm surge, and how to also encourage more ecologically driven planning,” said Arthur Platt, an architect and guide on the boat tours.

The cruises run on Sunday, Tuesday and Thursday afternoons, as well as Friday mornings throughout the spring and summer, offering both the regular architecture tour and the Sandy-focused Featured Guide series on a 1920s-style luxury yacht.

At nearly three hours, the tour covers roughly 32 miles and launches from Pier 62 at Chelsea Piers.

The series will include talks and tours by Catherine Seavitt, landscape architect and associate professor at CUNY, and Kate Ascher, author of “The Works: Anatomy of a City.”

The tours will also highlight examples of ecologically driven design that are already in place, such as Brooklyn Bridge Park and Swindler’s Cove, along with more sustainable ways to protect the city’s ports and seaside industry.

“Even though that industry and port activity is removed from what most tourists see, New York is the third-largest container port in America,” Platt said.

“We’ll talk about that — how shipping and the wealth in the area has to address both the changing climate and the economy.”

Tickets for the cruise are available online for $78 and include complimentary beer, wine, champagne and light snacks. 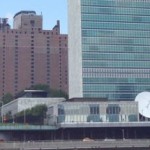 On the Waterfront: Touring Manhattan By Yacht

The 2013 ASJA Conference is scheduled for April 25 – 27 in New York City. Between now and then, The ASJA Monthly will run pieces by New York City denizens on places and attractions to visit while in the Big Apple.

Manhattan’s jagged cityscape gleams as the sleek yacht I’ve boarded glides away from its mooring at Chelsea Piers on the Hudson River. I am on an architectural boat tour of New York Harbor and for the next three hours we’ll sail around 32 miles of New York City looking at buildings and highlights seen from the Harbor. There are speakers everywhere so we can hear the guide no matter where we choose to sit or stand, bow or stern, interior or exterior. This “AIA Around Manhattan Architecture Boat Tours on Classic Harbor Line” is led by an AIA (American Institute of Architects) guide Arthur Platt who says, “Geographically, New York Harbor is one of the greatest natural harbors in the world, a result of the last great ice age that blasted open a natural channel entrance that flows under the Verrazano Bridge.”

We have come to observe the ever-changing NYC skyscape from a sleek mahogany-trimmed Classic Harbor Yacht designed like a 1920s “commuter” yacht with two John Deere engines totaling 1000 horsepower. The speed is a welcome relief from the last time I circumnavigated New York Harbor on an Outward Bound pulling boat. Though the six-passenger boat had a sail, there was almost no wind, and it took us ten hours of rowing to complete the voyage.

On the Yacht Manhattan, we speed south in Chelsea, and are soon peering up at Jean Nouvel’s glittering Lego-like condo. Each window is a different size and shape, all in various shades of blue. A block later we study Frank Gehry’s IAC headquarters, a curvaceous hunk of glass whose edges stick out like a pleated skirt. We sail past the Standard Hotel, an 18-story slab that straddles the High Line. My boyfriend Jamie and I wink at each other. It is said that when the Standard opened, a few of the guests made love with their shades open in full view of the people strolling the High Line below. Of course, the guide says nothing of this.

Along the edge of the Hudson at West Cove Park, mothers push strollers, people cast fishing lines into the water, and bicyclists zip by. I bike from my apartment in midtown east south, then head up to the George Washington Bridge, but because I’m constantly on the lookout for walkers, cyclists, and red lights, I mostly miss the view. Jamie squeezes my hand as we pass the new Freedom Tower which dwarfs everything else. I’ve visited Ellis Island and the Statue of Liberty many times before, but they never fail to excite me. We head to DUMBO (Down Under the Manhattan Bridge Overpass) and the Brooklyn Bridge Park where the restored Jane’s Carousel is housed in an all-glass Jean-Nouvel-designed pavilion.

Roosevelt Island is now home to the new FDR Four Freedoms Park, and huge granite slabs that rip-wrap the southern tip of the island glitter in the sunlight. We cruise beneath the 59th St Bridge just as an aerial tram glides across the East River. The 59th St Bridge, formally known as the Ed Koch Queensborough Bridge, is just one of 18 bridges that connect NYC to New Jersey and the other boroughs. We pass beneath NY’s oldest standing bridge, the High Bridge in Harlem, now being restored and which will reopen in 2014 as a pedestrian walkway and park. At the Cloisters, built on the former CJK Billings Estate, we learn that this captain of industry loved yachts and fast horses, and spent so much time at the Harlem River Speedway that he built a 25,000-square-foot lodge and stables—now Fort Tryon Park.

One of the most unexpected sights is Swindler’s Cove in Inwood with its colorful Victorian boathouse. Years ago, I went on a “Manhattan Bushwhack” adventure, a hike which included walking through the Inwood woods, then strewn with garbage and debris and homeless people. Then Bette Midler created the New York Restoration Project, and now this former eyesore is a serene waterfront park complete with vegetable and flowering gardens, winding paths, an observation bridge, and the restored boathouse.

But what’s this? Stuck in the muck off the Harlem River is the yacht of Louis C.K., who obviously was not thinking about the tide when he decided to drop anchor here. Even our guide is shocked by the beached boat and says, “It’s going to be hours before the tide changes.” Our attention turns to the other bank of the river and the huge blue varsity “C” on a rock face above the train tracks, originally created in 1952 by a Columbia University coxswain. Today, the Columbia crew maintains the “C.”

The Spuyten Duyvil Bridge is less than six feet above the water, and we wait for it to swing open 90 degrees on its turntable so we can leave the Harlem River and continue south on the Hudson. Just before we get to the George Washington Bridge, our guide points out a building that seems to have the face of a carved pumpkin, so it’s not surprising it’s called The Pumpkin House. And then we sail beneath the GW Bridge and look out fondly at the little Red Lighthouse, star of the children’s book, The Little Red Lighthouse and the Great Grey Bridge.

Boats and yachts bob lazily in the water at the 79th Street Boat Basin. On the river pathway is an endless parade of runners, cyclists, strollers and dog walkers. We sail by gigantic Intrepid Sea, Air and Space Museum, now home to the Space Shuttle Enterprise. I’m hoping to catch a glimpse, but unfortunately, the Shuttle is covered by a large white bubble. No matter because there are two gigantic cruise ships docked nearby which make even the Intrepid seem small.

The guide points out a building, 200 11th Avenue at 24th Street, and tells us that some of the residences come complete with a “sky garage,” an actual parking garage on the same floor as the apartment. “Drive your car into a special elevator, push the button, and ride up to your floor where you can park next to your living room.” With NYC parking space at a premium, it makes perfect sense.

Back at Pier 62, I feel less like a jaded New Yorker who has seen it all. There’s always a way to have a fresh look at Manhattan—you need only change your vantage point.

Directions: From Grand Central Station take the downtown #1 train. Get off at 23rd St and 8th Avenue. Either walk to the river or get a transfer and take the M23 crosstown bus at 8th Avenue and 23rd St. directly to Chelsea Piers.

Comments Off on On the Waterfront: Touring Manhattan By Yacht