Time Out gives us a Shout Out! 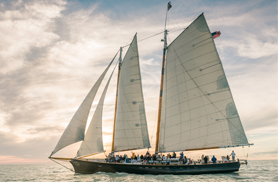 Time Out NY has listed as one of the best dinner cruises in NYC.

Time Out gives us a shout out to join us on our Morimoto Sushi and Sake Sunset Sail aboard the Schooner America 2.0 for a magical sunset dinner cruise.

Sail with us into the sunset as you enjoy top rated sushi for dinner by the Iron Chef: Chef Morimoto.  Watch the sun dip behind the Statue of Liberty and take in the view of the most famous skyline in the world.  Sip on your sake and sail with us for this magical dinner cruise.

Comments Off on Time Out gives us a Shout Out! 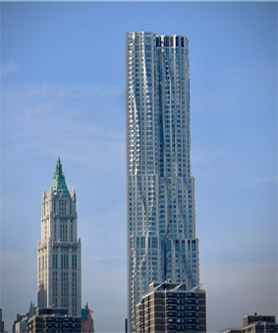 Still the tallest residential rental building in New York City, 8 Spruce Street is one of two projects by Frank Gehry and Partners featured on the tour. It’s Gehry’s first skyscraper, and it has redefined the downtown skyline. We think the façade’s characteristic stainless steel and furrowed surfaces are particularly mesmerizing from the water. 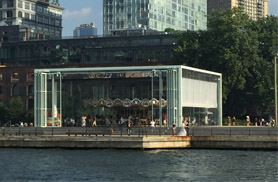 Over the course of 25 years, Jane Walentas painstakingly restored this 1922 carousel by hand in her studio in DUMBO. She hired her favorite architect, Pritzker Prize-winning Jean Nouvel of France, to create this jewel box to house the carousel, now installed between the Brooklyn and Manhattan Bridges. Though it may appear delicate, in 2012 it successfully withstood the surge from Hurricane Sandy. 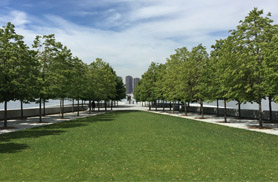 Originally designed in 1972 by the esteemed architect Louis I. Kahn, this park and memorial to FDR’s famed “Four Freedoms” speech was finally completed posthumously just one week before hurricane Sandy struck in 2012. Located at the southern tip of Roosevelt Island, the park has become one of New York’s most memorable urban spaces. 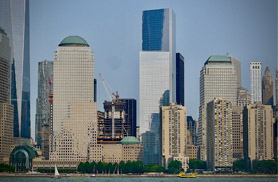 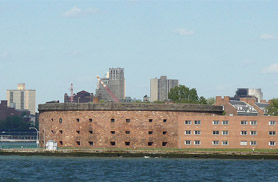 Located opposite Ellis and Liberty Islands, Governors Island functioned as a military outpost for over 200 years. Today, it has been transformed into a new public park and cultural mecca, anchored by its iconic three Hills at the southern tip. We appreciate the way West 8 Landscape Architects’ design has created a new communal backyard for the city. If you haven’t been to Governors Island, the view from the water may entice you after it opens again on May 1. 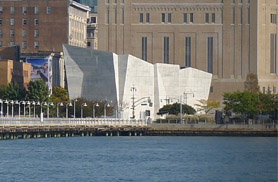 Resembling the faceted makeup of salt crystals, the design of this striking utilitarian structure by Dattner Architects and WXY Architecture directly mimics its purpose. The Spring Street Salt Shed actually stores 5,000 tons of winter salt for the Department of Sanitation New York. It has won numerous architecture awards, and is one of our favorites on the tour. The adjacent service building was also designed by the same team.

It’s hard not to recognize these two instant icons added to the Hudson River waterfront. 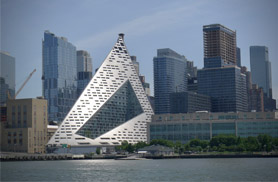 Called a trapezoid or hyperbolic parabola by some, Via 57 West is described by Danish architecture firm Bjarke Ingels Group as a marriage between a courtyard building and a skyscraper: or a “courtscraper”, if you will. It contains over 700 rental apartments; note how the building’s its striking geometry unfolds as the boat passes. 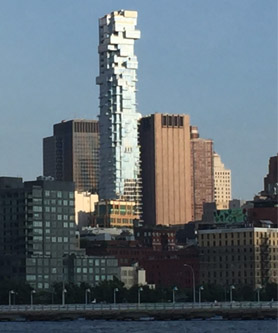 By contrast, the upper penthouses of the luxury condominium tower at 56 Leonard Street in TriBeCa are characterized by distinctive offset glass boxes: no wonder Herzog & de Meuron’s tower has acquired the nickname “Jenga Block Tower.” The unique view from the water of this icon is unsurpassed, and not to be missed!  Look for nearby 180 Leroy Street in the West Village nearing completion also by this Swiss team of architects. 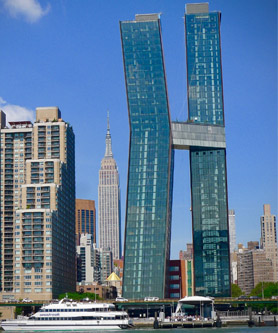 These unusual leaning twin towers by SHoP Architects on the East River gesture to each other in a playful and unmistakable way that has earned them the nickname the “dancing buildings.” The sky bridge connection contains the resident amenities such as the fitness center and a swimming pool.  Keep an eye on the emerging Domino Sugar site across the river for more fanciful residential buildings by this architect.

Join us on an AIANY Architecture Tour this spring and see these and other landmarks, and discover some of your own new favorites!

Comments Off on 9 projects for 9 years