May 11, 2016, New York, NY – For the third straight year, Turnstile Tours and Classic Harbor Line are leading a special series of tours that examine the military history of New York Harbor and give visitors a chance to get a waterside view of the Navy and Coast Guard ships in town for Fleet Week.

These 2.5-hour tours will be offered to the public on Saturday, May 28 at 10:15am and Sunday, May 29 at 4:30pm. Departing from Pier 62 at Chelsea Piers (W 22nd St & West Side Highway), the tours will be held aboard Classic Harbor Line’s beautiful wooden motor yacht Manhattan. Tickets are $68 per person and include a free drink and light hors d’oeuvres. World War II-era veterans and defense workers are invited to attend the public tours for free, and discounts are available for veterans and active duty service members.

The public can purchase tickets at turnstiletours.com or sail-nyc.com, or by calling 212-627-1825. Advance purchase is recommended.

These special harbor tours will be led by Andrew Gustafson, Vice President of Turnstile Tours, head of Turnstile’s public programming at the Brooklyn Army Terminal, and creator of the public tour, “The ‘Can-Do’ Yard: The Brooklyn Navy Yard in World War II,” offered monthly in partnership with the Brooklyn Navy Yard Center at BLDG 92. Andrew also led a tour series in 2015, “Brooklyn Waterfront: Past & Present” about the area’s industrial history and contemporary development. Andrew’s voice will be complemented by a selection of oral history recordings from the Brooklyn Navy Yard Archive, collected from sailors, shipyard workers, and merchant mariners that help to bring stories of the harbor at war to life.

Until very recently, New York Harbor was a major military port, home to shipyards, bases, and embarkation points that served American forces across the world. This tour will focus especially on World War II, when the harbor sent 3.2 million troops and 37 million tons of supplies overseas, and 39 shipyards built and repaired vessels for the war effort. Factories making garments, machinery, and food shifted production to make uniforms, weapons, and rations. And the bright lights of Times Square, even the Statue of Liberty’s torch, were turned off to protect ships from submarine attack (the silhouettes made excellent targets for lurking U-boats).

The first stop on the tour will be to head up the Hudson River to pass by USCGC Katherine Walker, US Naval Academy Yard Patrol Craft, three vessels of the Royal Canadian Navy, and the massive amphibious assault ship and helicopter carrier USS Bataan, the largest Navy vessel to participate in Fleet Week New York for several years. We will also stop by the USS Intrepid to discuss its wartime service and repairs and upgrades conducted at the Brooklyn Navy Yard. From there, we will head south, past the Statue of Liberty and Ellis Island to Bayonne, NJ, where a former Naval shipyard still repairs ships today, and troops and supplies were embarked from World War II to Desert Storm. Skirting the Staten Island shore, we will see the USS Fort McHenry and USS Shamal at The Sullivans Pier, named for the five Sullivan brothers killed aboard the Kearny, NJ-built cruiser USS Juneau in 1942.

Heading up the Brooklyn shoreline, we’ll examine sites like the Brooklyn Army Terminal, Bush Terminal, and the piers and shipyards of Red Hook, and see the vessels berthed at the Brooklyn Cruise Ship Terminal, including destroyers USS Bainbridge and Farragut, and the Coast Guard Cutter Forward. We then head under the Brooklyn Bridge and into Wallabout Bay, site of the Brooklyn Navy Yard. The country’s busiest shipyard during World War II, BNY built 3 battleships, 4 aircraft carriers, and 8 tank landing ships that participated in actions across the globe, while also repairing more than 5,000 vessels. This is also the yard that built USS Arizona, sunk at Pearl Harbor on December 7, 1941, and USS Missouri, the site of the Japanese surrender on September 2, 1945 – two ships that form the bookends of America’s involvement in World War II. Our final stop will be to skirt Battery Park, home to many important World War II memorials, including the Merchant Marine Memorial, honoring the 9,000+ US merchant seamen killed in the war. ****

Turnstile Tours creates and operates unique, rigorously-researched, engaging tours and public programs in partnership with non-profit organizations and cultural institutions that bring together out-of-town visitors, community residents, and people of all ages and abilities. Turnstile is a Certified B-Corporation, and New York State-registered Benefit Corporation, and has committed to contribute at least 5% of all ticket sales to designated non-profit partners. Current programs include several different theme-based public tours exploring the past and present of the Brooklyn Navy Yard, public tours of the Brooklyn Army Terminal, Food Cart Tours exploring the street food scene in Manhattan’s Financial District and Midtown, and tours of the Lower East Side’s Essex Street Market and Brooklyn’s Moore Street Market. Classic Harbor Line is a national company with a collection of turn-of-the-century style schooners and motor yachts operating in New York City, Boston, Newport, RI, and Key West, FL.

Classic Harbor Line offers the alternative to typical sightseeing boat tours, with most tours on eco wind-powered sailing schooners that are never over-crowded. In its home port of New York City at Chelsea Piers, Classic Harbor Line offers unique programming, with special cruises like the critically-acclaimed Official AIA-NY Around NYC Architecture Tour, Morimoto Sushi & Sake Sail, and full-day trips to Bear Mountain. Classic Harbor Line’s parent company and maker of all the yachts is Scarano Boat Building in Albany, NY, where all boats are made proudly using only American-made parts.

After difficult sailing conditions on Saturday, Sunday turned out to be a spectacular day for the 2016 America’s Cup(at least for us viewers). On Saturday, we attended via the official media boat and on Sunday, thanks to Classic Harbor Lines, we were able to get in on the three races Sunday afternoon very close to the action in New York harbor. The America’s Cup is the oldest international sporting trophy historically, named for the schooner that won the first regatta in 1851. Winners host the event the next time, and as such the New York Yacht Club hosted the race from 1851 to 1983 (with some years in between with no races) when it lost to the Royal Perth Yacht Club of Australia. In 1920 the race was moved to the Newport Yacht Club, making it 85 years since the race was hosted in New York harbor. Read more here.

Comments Off on UnTapped Cities: Photos of America’s Cup Race aboard CHL 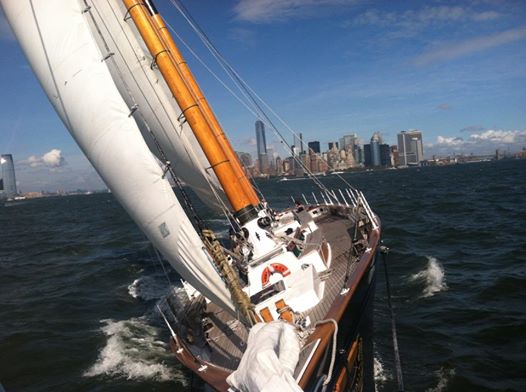 After difficult sailing conditions on Saturday, Sunday turned out to be a spectacular day for the 2016 America’s Cup (at least for us viewers). On Saturday, we attended via the official media boat and on Sunday, thanks to Classic Harbor Lines, we were able to get in on the three races Sunday afternoon very close to the action in New York harbor.

Click here to view some amazing photos and read more on Untapped Cities!

Comments Off on America’s Cup Coverage in NYC 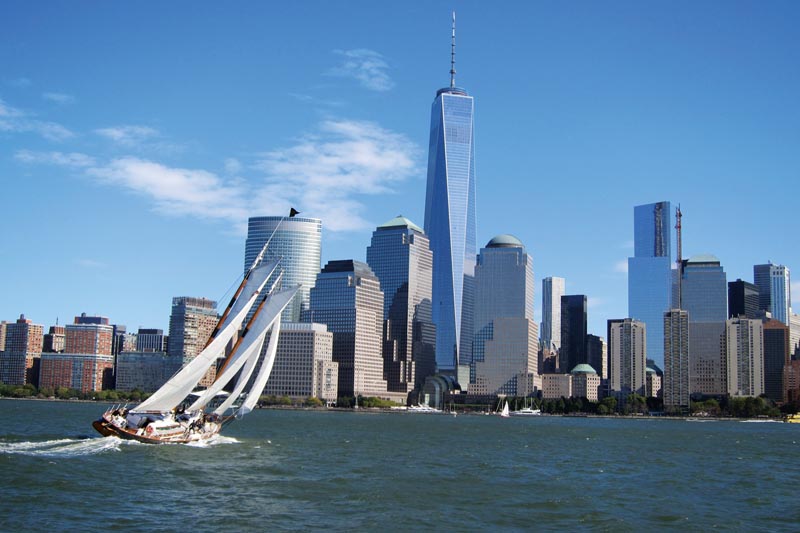 After a 96-year absence, the America’s Cup returns next month to the Big Apple with the Louis Vuitton America’s Cup World Series at New York Harbor May 6-8. This time around, however, devotees will have an unusual opportunity to experience the thrill of world-class sailing as if they were members of the crew itself.  Click here to read more on Westchester Magazine!