DISCOVER BOTH CLASSIC & NEW WATERFRONT PARKS WHEN YOU JOIN THE REGULARLY SCHEDULED AROUND MANHATTAN OR LOWER MANHATTAN TOURS!

This summer, join us as we explore these parks (and more) from the unique vantage point of the water: 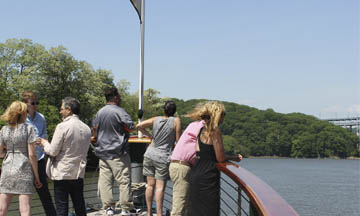 Explore the pre-historic topography of mannahatta along the Harlem River Ship Canal. Densely forested hills and salt marshes evoke visions of the region before European settlement.

Situated at the southern tip of Roosevelt Island and across from the United Nations Headquarters, this four-acre memorial to Franklin D. Roosevelt celebrates the Four Freedoms he articulated in his 1941 State of the Union address. Designed by Louis Kahn in 1973 and posthumously completed in 2012, the park stands as an affirmation of our nation’s ideals.

In the middle of NYC’s Upper Bay sits an island that was off limits to the public for 200 years. Today, new landscape architecture by West 8 , including four engineered hills, and large-scale sculpture peacefully cohabitate with landmark military structures including Castle Williams and Liggett Terrace.

Join the July 23rd or October 15th tour to witness the transformation of NYC’s former 2200 acre landfill into public parkland.  Members of the Freshkills Park’s team join the tour to share their firsthand knowledge of the engineering and environmental policy required to achieve this vast land reclamation project and AIANY guides provide insights on Staten Island’s waterfront infrastructure.

Click here to see the NYC Architecture Tours we offer!