Classic Harbor Line hosts the “Boat Band” every week to offer a classic style NYC Jazz cruise aboard the Luxury Yacht Manhattan II in NY Harbor.  We took a moment to sit with leader of this Jazz Band; Mike McGarril and get to know him and his journey a bit better. Here is what he has to say:

My older brother played trumpet before me, so I wanted to play an instrument in the school band too. Saxophone seemed like the coolest one I could choose at the time.

I studied in the New School for Jazz and Contemporary Music in New York City. I completed my BFA there.

Our name is the Boat Band. It is an obvious pun, because the only venue we play is out on the water! I also lead a band under my own name, the Michael McGarril Quartet. That is a funk/modern jazz project. And I am a member of two singer-songwriter bands right now led by Michael Persall and Lindsay Dunphy.

Christian Nourijanian, 28, keyboards, New School/MSM. I met Christian in college because we had a lot of mutual friends, but it wasn’t until a few years later that we started playing music a lot together. I remember being so impressed that he could play organ using his left hand for bass notes. I never had the chance to play with organ players before. He was a perfect fit for the Boat Band, and we have since become musical brothers in a way.

Dustin Kaufman, 29, drums, New School/MSM. Dustin and I began playing music together a lot in college, about 10 years ago. Our playing styles were so similar back then it was like we could predict what each other was going to play! He has since become such an in-demand drummer than I feel fortunate every chance we have to play together.

The Boat Band have been performing at CHL for over 7 years now. My favorite part is that each week we pick different music to play and that we get a chance to vibe off of the audience.

Our influences aa a group range from jazz masters like Miles Davis, Oscar Petersen, Herbie Hancock, and Stan Getz to more modern artists such as Stevie Wonder and Paul Simon. Personally, I am highly influenced by saxophone players including Coltrane, Joe Henderson and Michael Brecker.

The three members of the trio do play as part of other bands from time to time.

I don’t have a strict practice schedule at all really, I just try to find time between gigs, rehearsals and teaching to keep my playing at its best. The goal is to play several hours every day, so when I do have time for this I am thrilled.

I play the saxophone, mostly. I also play flute, clarinet, and a little piano. I chose the saxophone at a young age probably because I remember hearing it a lot on the radio and on albums that my Mom loved to listen to.

Some of the jazz standards we play the most are ‘I Thought About You’, ‘No More Blues’, ‘Autumn Leaves’ and ‘Along Came Betty’. We also play ‘How Sweet It Is’ and ‘Boogie On Reggae Woman’ quite often towards the end of the cruise.

Yes I have been writing music ever since I could tinker around on piano. Some of my latest songs I feature when performing with my quartet.

Every show is unique, but I would say that usually falls into two categories. On one hand, when the music is really grooving and people start dancing, I get a lot of satisfaction. That’s how you know that people are feeling what they are hearing. Otherwise, sometimes the crowd is simply very attentive without really showing much visually. But as a performer, you can still tell that people are following along to the emotional side to your playing, which pushes you further.

I have only gotten butterflies occasionally when I’m playing to a room filled with people I know, especially when there are a lot of heavy musicians there too. In that case I usually close my eyes and try to let go of all distractions. Sometimes it works and sometimes not!

So much so. At first, my playing usually mimicked whatever I was listening to most at the moment. Since I started writing and performing only originals with my quartet over the past two years, I find that my playing style is becoming much more clear and defined.

If you want to be good at anything, you have to immerse yourself in it. Practice is essential. Also, surround yourself with people who have more experience than you.

In the near future, I plan on recording an album with my quartet. Long term: become more active writing for other artists.

I play at venues like Rockwood, Pianos, and the Studio at Webster Hall with singer-songwriter bands quite often. I’ve also played recently at Bowery Electric and Silvana with my own group, and at Terminal 5 with the band St. Lucia.

Come hear the Boat Band! We really go for it, a lot of interplay among the players, and it’s always grooving. Once you hear you’ll understand.

Michael McGarril:  Saxophonist Michael McGarril has been busy performing in and around the New York jazz scene for the last decade. With his playing described as “a pleasing tone and agile phrasing” (Daily Gazette), Michael has found a nice fit as the leader of Classic Harbor Line’s house band, the Boat Band. He feels equally at home interpreting traditional jazz standards, blowing over R&B and soul grooves, or experimenting with new and original song formats. He recently finished a stint with legendary jazz drummer Charli Persip’s big band, Supersound, contributing to their latest album Intrinsic Evolution. Along with his own group, Michael performs with singer-songwriter Lindsay Dunphy, and can be heard sitting in with many other acts around New York City. Originally from the Hudson Valley in upstate New York, Michael moved to the city in 2004 pursuing a degree at the New School for Jazz and Contemporary Music. He has performed with Cuban songstress Xiomara Laugart, jazz greats Frank Wes and Jimmy Heath, and was the opening act at the Belleayre Jazz Festival for two consecutive years for Herbie Hancock and Chick Corea.  michaelmcgarril.com 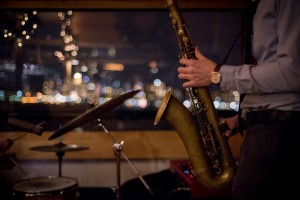 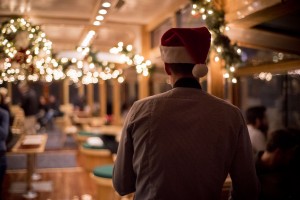 Step aboard our luxury Yacht Manhattan II in full holiday decor and join us for our romantic Holiday Jazz Cruise.  Enjoy this 1.75 hour cruise with your loved one and a glass of Champagne in hand.  See the city lights twinkle at night as you cozy up for an evening out in NY Harbor aboard a luxury yacht.  Holiday Jazz will take place on Wednesdays, Fridays and Sundays.  Click here to buy tickets

Posted in News & Events | Comments Off on NYC Jazz Cruise Band Leader: What Everybody Ought to Know About Mike McGarril